Millions of Ugandans now know that the tax system in Uganda is not fair. The launch of the Fair Tax Monitor by Oxfam and partner SEATINI at the end of January was on the biggest national private television in Uganda (NTV), the radio and debated in many newspapers. The secret of the success of the launch? They waited for the time to be right.

Joseph Olwenyi, project leader on Financing for Development at Oxfam in Uganda said with shining eyes: ‘The report was finalized at the end of the year and the results were very interesting. It shows how big companies get years of tax holidays, while poor people pay the price: 66 percent of Uganda’s revenue is made out of indirect taxes: on food, medicines and all kinds of basic services. At the same time, public services such as education and health are hardly delivered to the people. Investments in those areas decreased in the last 4 years.’

But Oxfam and SEATINI knew that in December many stakeholders wouldn’t be present for a launch: everybody would be thinking of the Christmas holidays. The right moment would be a month later, during the World Economic Forum in Davos and the parallel Global Week of Action in the South. Joseph: ‘We knew that we would have the attention of the media during that time. During a field visit earlier, I got to understand how important it is to show real people’s lives. We wanted to give a face to our message. That is why we chose a district in the countryside, Soroti, to organize a march and a debate with the people from there, with whom we have already been working for a long time.’

The debate held on Monday the 21st of January was very good, according to Joseph. There were many statements from the people about poor service delivery: ‘Such as the fact that there are no medicines in the health centers and that women prefer to deliver their babies at home despite the risks that it entails, since the maternity wards lack facilities. The interesting thing was that the politicians from the district who were present during the debate agreed on the difficulties and complained that the local revenues (such as money payed for public transport and taxes on waste collection) were taken by the central government and not being returned to the district.’ 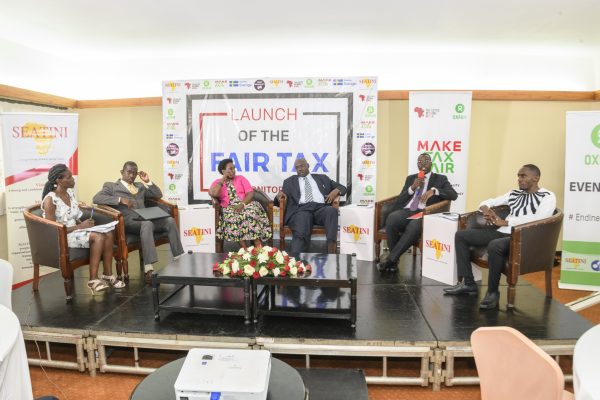 Debate - Launch of the Fair Tax Monitor (source: Emmanuel Museruka (Malaika Media))The whole debate was live on Delta Radio and more radio broadcasters were there to follow it. Joseph: ‘Many people in Eastern Uganda called the radio to comment that they pay too much tax, being taxed on selling on the market, buying on the market and so on.’

The debate in Soroti was also filmed by the private national television channel, NTV, but it was not yet to be broadcasted. Joseph: ‘We asked them to wait. We still had to officially launch our Fair tax Monitor. We did this on Wednesday the 23th of January in Kampala, together with many guests: people from  universities, labour unions, members of parliament, representatives from the Uganda Tax Revenue Authority, etc.’

The report was received by the government through the economic adviser of the minister of finance. Joseph: ‘They promised to take our suggestions in consideration.’

But there were still two surprises left. First: a stunt in the Golf Course Hotel where the launch of the report was happening. Joseph: ‘We thought of a way of bringing the politicians closer to the reality most people live in Uganda: we asked them to choose a meal from the menu, like a nice Italian plate. They were served and when they opened their covered plates they saw beans and ugali and cooked posho (maizemeal). No one would expect to go to a big hotel only to be served this kind of meal with no other options, especially since hotels always have a variety of food. Posho is the quickest go-to food, especially for low income earners, compared to other foods within the same price range because it is presumed to last longer in the stomach and also to give a lot of energy for people to do their manual work.’

The politicians were quite surprised and refused to eat it. They did not expect this at all and we explained to them that Ugandans also do not expect bad service delivery after paying so much tax… They were relieved that it was just a stunt.’

And then there was a last surprise. NTV still had to broadcast the debate held earlier in Soroti. Joseph: ‘We discussed this a lot. In the end we decided to ask NTV to broadcast it only on Saturday the 26th of January, the day that president Museveni was celebrating his 34 years in power. During the week, NTV broadcasted small advertisements about the debate multiple times, showing in a few seconds some statements from the people of Soroti on tax.’

On Saturday, while public television was broadcasting speeches about all the successes of the government of Museveni for the whole day, NTV put the debate in Soroti on television at 8 PM, prime time. Joseph: ‘It has been seen by millions. This is a great start for our next campaign: fair tax and money for medicines.’

Newspaper articles in the Uganda Avanguard and the Monitor.