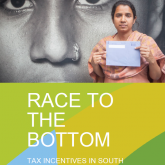 In order to attract foreign investments, developing countries have been fiercely competing these past years and have been offering more and more advantages to investors; among them, tax incentives. Nonetheless, this tool proves to be effective only when real competition occurs between countries, when investors do have a choice between two different locations, which happens less often than is usually assumed. Indeed, for a consequent part of the total investments, there is no competition between countries due to the competitive edge one country possesses. Then, in this case, providing tax incentives would seem unproductive and hurtful, without major impacts on the investors’ decision process.

The aim of this report is to assess this feature for the region of South East Asia and lay the groundwork for further research at the national or regional level. What are the sectors and countries that do possess a competitive advantage and where tax incentives might not be needed?