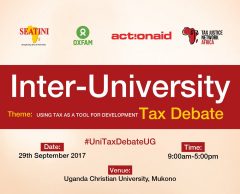 SEATINI Uganda, Oxfam, ActionAid and Tax Justice Network-Africa, in partnership with Uganda Christian University as the host, is organising an inter-university students tax debate, as an opportunity for students in universities in Uganda to learn about tax justice. The debate is expected to introduce the students to the concept of tax justice and the role they play in pushing their governments to effect progressive taxation measures as well as mechanisms to curb the outflow of resources. Despite having been previously exposed to some of the content matter on tax as part of their training, the Debate will expose them to different material, especially that of a research nature. This would go a long way in giving them a glimpse into other perspectives especially on emerging linkages between tax and development  and most of all, make them aware of the responsibilities that await them as future leaders and decision-makers on Uganda’s financing for development prospects.

The one- day event is set to draw participation from 90 students across nine universities in Uganda. Each team from the nine universities will comprise of three members who would go head-to-head with other teams.